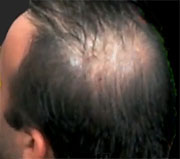 MONDAY, Sept. 15, 2014 (HealthDay News) -- Men with male pattern baldness may face a higher risk of developing an aggressive type    of prostate cancer than men with no balding, a new study suggests. But, the study authors noted that it's not clear yet whether men       with this specific pattern of baldness should be concerned. Their study only found an association between male pattern baldness and aggressive prostate cancer. It did not prove cause and effect. "It is conceivable that, in the future, male pattern baldness may play a small role in estimating risk of prostate cancer and may contribute to discussions between doctors and patients about prostate cancer screening," said study co-author Michael Cook. Cook is an investigator with the division of cancer epidemiology and genetics at the U.S. National Cancer Institute. The study is published in the Sept. 15 issue of the Journal of Clinical Oncology. Male pattern baldness is a pattern of hair loss that begins when the front hairline as well as the top of the back of the head (crown) starts to recede. In some men, the hair recedes on the right and left sides of the upper forehead and a tuft of hair remains in between. This kind of baldness develops as a result of "a cumulative, lifelong exposure to testosterone in the skin," said Dr. Charles Ryan, an associate clinical professor with the department of medicine at the University of California, San Francisco. Ryan wrote an accompanying editorial in the same issue of the journal. The level of testosterone isn't necessarily the issue, Ryan said, but instead the skin's ability to process the hormone. Hair-loss treatments such as Propecia aim to block the effect of testosterone -- sometimes called the male hormone -- on the skin, he said. Testosterone also drives prostate cancer, Ryan said, and that could explain previous research that's linked male pattern baldness to the disease. The researchers looked at nearly 40,000 men in the United States who enrolled in the study between 1993 and 2001, when they were between 55 and 74 years old. The participants answered questions about what they remembered of their level and type of hair loss at age 45. About 18 percent of the men recalled having male pattern baldness at age 45, according to the study. During the study follow-up period between 2006 and 2008, the investigators found that more than 1,100 men in the study were diagnosed with prostate cancer. Nearly 600 of those men developed aggressive prostate cancer. Men who remembered having a specific type of male pattern baldness -- in the front and, moderately, around the crown of the head -- were 39 percent more likely to develop an aggressive form of prostate cancer than men who had no baldness. But they weren't more likely to have less aggressive types of prostate cancer, according to the study. Other types of baldness were not linked to the development of aggressive or other types of prostate cancer, according to the study. The study does have some significant limitations. One is that it relied only on memory to determine how much hair loss men had at age 45, and it's possible that men might not remember accurately. Another is that 89 percent of the men were white, so it's not clear how non-whites might be affected. So, where does that leave balding men right now? Ryan suggested that doctors keep an eye on men in their 40s who have this kind of baldness. "They might want to think of hair loss as a condition they'd want to record and follow, and consider a potential precursor to health problems," he said. "It may be an early warning sign." However, Ryan said, "these data probably don't really support specific programs for men to be screened for prostate cancer because of baldness." There's currently much debate in the medical community about the overall value of screening for prostate cancer in all men -- balding or not -- that still remains to be settled. SOURCES: Michael Cook, Ph.D., investigator, hormonal and reproductive epidemiology branch, division of cancer epidemiology and genetics, U.S. National Cancer Institute, Bethesda, Md.; Charles Ryan, M.D., associate clinical professor, department of medicine, University of California, San Francisco; Sept. 15, 2014, Journal of Clinical Oncology

Other claims approved by the NNHPD

No results See all results
✕

Your cart is currently empty.